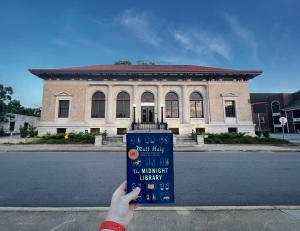 The Midnight Library
Written by Matt Haig
Published August 13, 2020
4 out of 5

I don’t recommend this book lightly to anyone. It deals with heavy themes and could be triggering for most. However, I connected deeply with this novel because of those themes and my brush with death.
When reading this book it was hard not to picture what my ‘Midnight Library’ would look like. Granted I did wonder; would it be an actual library from my past OR would it be a video store. After-all I have always been a lover of cinema and I even worked in a video store in my early 20s. So it’s a toss up for me. Maybe mine would be a combination of the two? Who knows. That said this would definitely be the exterior.
According to The Newberry Museum’s official website, the building was originally constructed as a Federal Building and United States Post Office dating back to 1911. The building would serve the community as the Post Office until the 1960s; afterwards it would become the Newberry Saluda Regional Library. The same library that would serve my community until a new building was built a few blocks down.