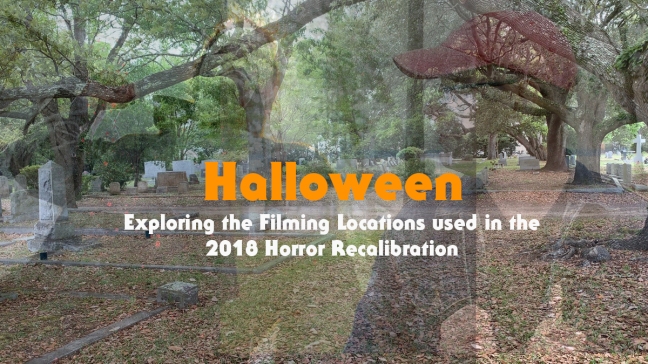 To be transparent, I don’t get excited often. I credit that inability as a major character flaw; however, when I learned a new Halloween was going into production with Jamie Lee Curtis attached; I was immediately excited. Then to learn it was being shot in Charleston, South Carolina just a couple hours away from my home that excitement grew even more. You see, Michael Myers was my boogeyman. Freddy and Jason who? But Michael… Well, let’s just say he scared the living you know what out of me.

When I was in middle school, there were days I would skip school, simply to have Halloween movie marathons. To explain how much of a dork I was, well am, I even had a binder full of Michael Myers mythology. I called it ‘Halloween Documented’. Hence the name of this series presented by Operation Adventure.

Fast forward to October 2018. The excitement and anticipation for the film had continued to grow. But there was somewhat of a roadblock standing my way. You see, in August, I had been diagnosed with Acute Lymphoblastic Leukemia and going to a movie theater was nearly out of the question. Yet. I had to see this film in a movie theater.

I carefully plotted and decided I would venture out to see it; however, I would go on a random week day when I knew that hardly anyone would be in attendance.  I was one of two in the theater. The other guy, another diehard fan of Halloween, and go figure a friend of mine. Sitting there watching the film I was captivated by the story and wondering how this film was logistically filmed. I knew several of the locations off hand but a few I questioned; were they real or simply built for the production? As a story, Halloween, touched a nerve; however, in all honesty, I wasn’t sure what nerve it touched. Does that even make sense? I don’t know. It’s hard to explain. And when people would ask, “Hey, what do you think of the new film?” I would respond with, “I liked it. It was brutal. But good!” Little did I know the impact it had really made.

March 2019, I moved to Charleston. Set to live there 100 days post a bone marrow transplant. 30 days in the hospital post-transplant then another 70 days living in the area no more than 30 minutes away from the hospital. Naturally, I did the only thing that felt normal to me. I began working out a map of the filming locations so that I could make a video visiting them. Sadly, it would take six months before I could begin production on the video; however, that first day was reinvigorating. I felt so accomplished and proud of the footage and I was so at peace with everything I filmed.

But I was missing something.

I had made a conducive video. One that I was proud of. But it wasn’t enough. I needed to dissect it along with the series. If I was going to tell this story, I needed to do it right. Over the next two weeks I re-watched all eleven films making notes and drawing parallels. It was an interesting homework assignment that I gave myself.

By this time, I had moved back home and no longer lived in Charleston, which meant that I was only traveling to Charleston once every two weeks. By this time, I had not only re-watched the films multiple times I had also scripted out the episode as if it were a narrative film screenplay. I needed to be prepared. I had to be prepared. After all, this was my first ‘Operation Adventure’ travel video in over a year.

I filmed over the next couple of days perfecting the episode. Then it happened. The realization began to flood in. Sitting in my car, filming at the gas station, where a certain duo was murdered, I began to cry. Initially, I thought, let me film a vlog where I visit the filming locations and dissect the Halloween franchise but what I was internally doing was processing and unpacking the trauma I had endured over the last year. What a moment. Talk about being mind blown. All the while, sitting in a gas station parking lot crying on camera. Don’t worry, I didn’t leave that in the episode, I promise. But it was truly insightful. I had another mind blown moment the second day technically third day of filming the episode. This time while I was filming in the cemetery. I may have left that moment in the episode. You’ll have to watch. I promise it’s not drastically heavy.

Since this blog post is being distributed, I’m not going to post any spoilers here; however, you can read about them at the link below and/or watch the video.

To read the complete dissection of Halloween click here.

To watch the full episode of Halloween:

All content on this site is copyrighted material. All rights reserved. Contact Operation Adventure for licensing information. Copyright 2019 © Michael Tolbert