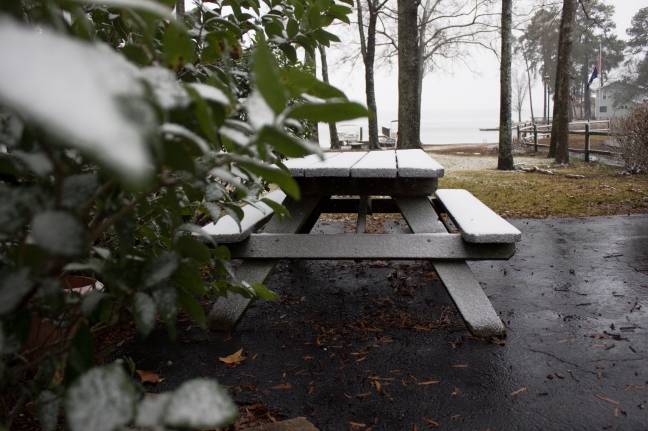 Waking up, running in the living room, cutting on the floodlights that overlooked the yard, quickly switching on the television to the local news station, and watching eagerly as they named off the county closures for the impending doom ‘snow’ day will forever be etched in my childhood memory. Lexington County, Richland County, Clairton County… Come on, come on, say it, come on and say Newberry County! And then, as the fear and panic would begin to set in that school might be a possibility, Newberry County schools closed.

Growing up in South Carolina, we didn’t get to many “real” snow days. Sure there would be the occasional we’re out of school because it’s snowing, however, by noon the storm would pass and the snow would be gone, But rarely enough to actually build a snowman or feel transported to another world. In fact I can probably count on one hand the amount of “real” snow occasions that have occurred in my 28 years of life.

The first “real” snow day that pops into my mind turned into a snow week, yet, felt like a month of solitude. Trapped in a house. Iced in from the outside world. This took place when I was in 5th grade and attending Little Mountain Elementary School. I remember it like yesterday. Despite the snowfall school had not been cancelled. Only delayed by two hours. As my dad drove me to school the snowfall began to get thicker and thicker. The accumulation began to build and as we pulled up to the school the principle, doing as principles do greeted us with a smile, followed by “Mr. Tolbert go on home, school has been cancelled for the day and most likely tomorrow depending on conditions. Be safe now.” Wait… No school… And for two days, could this get any better? The rest of the day was spent driving around, running errands with my father, and by the time we got home, mom was waiting with a roaring fire.

By nightfall the snow had stopped, however, heavy clouds hovered above. The temperatures began to decline rapidly, the fluffy snow turned to ice, and power outages began occurring statewide. I remember making a palate in the living room by the fire. Not only to stay warm but to have some sort of light. It was strange. Something I had never really experienced before.

The second “real” snow day occurred when I was a freshman in high school. Despite being a little older I ran into the living room. Cut on the porch floodlight and flipped to the local news station. One after another counties across the state began to delay and council school; however, Newberry County was not one of them. Sure we’re technically in the Midlands, but come on, when it snows in South Carolina we get it. Pissed, I rode to school with two of my cousins. One an upperclassmen and the other an 8th grader. Why? Why couldn’t we get a darn snow day? Hello, it’s snowing! As we drove closer and closer the campus the snowfall grew thicker. The clouds growing darker and darker and white covered the trees and the roads. We pulled up to campus, parked, and proceeded about our typical morning routine; however, the chatter of “why are we even here?” could be heard throughout the halls. The bell for first period rang and as I entered class, my teacher, who had been on bus duty, came in looking a bit flustered. “Hey folks, just got word, school has been cancelled. Watch your local news station tonight for cancellations or delays concerning tomorrow.”

We were out for the rest of the week; however, no power outages, and no ice.

The third “real” snow day occurred during my junior year at the University of South Carolina. As most of my friends can attest, I never found the point of skipping. School was my job. It was my job, and my privilege, to make it my only priority. This snow day occurred on a Tuesday. I remember this only because it was the day of my media law class. A class that literally gave me chills every time I entered the room. It was snowing and doing so pretty heavily. Should I just stay home? After all I did live a good 45 minutes away from campus. Not to mention the drivers in Columbia are horrible. Sorry not sorry, it’s the truth! Avoid Columbia at all cost. But I couldn’t. I had advisement. It would be nearly impossible to get another appointment and before registration for next semester. So I said, ugh, sucked it up and preceded to school. Just like before as I drove to campus the clouds got darker. The snowfall got heaver and heaver. Advisement came and went. My first class came and went. And then a retweet appeared on my phone. Jim Cantore was in Columbia covering “Winter Storm Pax.”

As I walked to my media law class I debated. Should I leave? If I were to skip, today would be the day. Should I?

But as these words consumed my brain my feet and body ushered me into class. Sitting amongst my tribe mates. I looked around quickly noticing something. The class was full. Hardly anybody was missing. They too were fearful of skipping.

That day our professor, who will go nameless, yes, still scared, took it easier then usual on us. Granted he didn’t dismiss us early. He held us right up until the end. However, you could tell that he too was giddy for the approaching snow day and cancellation. Oh and yes, school was cancelled, for the rest of the week.

These three “real” snow days have left impressions etched into my being that I hope to never forget; so at the beginning of last week when I saw the news report that there was snow in the forecast I immediately grew happy.

Now if it’s sunny and pretty the day before we’re definitely going to get snow. Check. It’s going to be sunny. System is coming up from the Gulf of Mexico. Check. Every time it comes from the gulf we get it. This is a sure thing. It has to be. It absolutely has to be.

As my being came in to consciousness Saturday morning I pulled myself to the bedside window. The sky was a whitish grey, snow was dusting the ground, and snow was continuing to fall. Now to say I’m 28 years old and a grown up who doesn’t get excited to see snow would be a total lie. In reality I pulled myself out of bed. Put on my boots. Then headed out the door with my camera in hand.

Now that being said, we didn’t get a major snowstorm. Just a light dusting, which was gone by noon; however, I did get a few cool pictures that I’m sharing with you all down below. 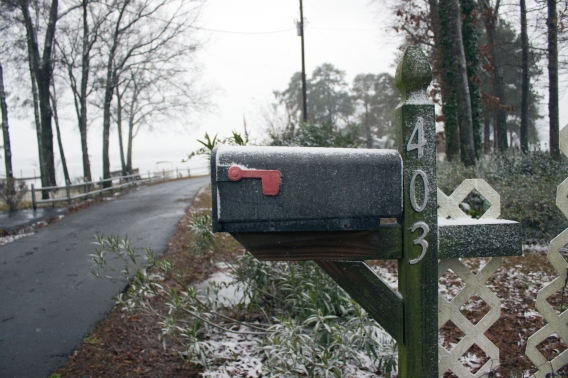 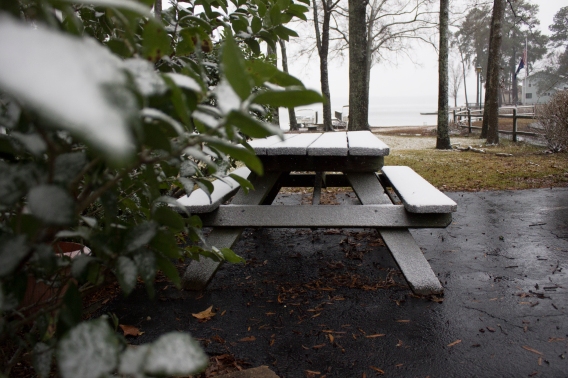